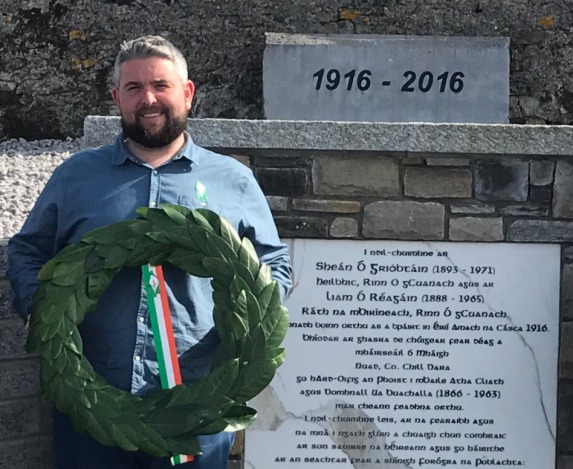 Sinn Féin local election candidate Conor D. McGuinness has said that the vision of the 1916 proclamation has yet to be fulfilled. He made the comments at Heilbhic where he laid a wreath at the 1916 monument in honour of those who fought and died for Irish freedom.

“Every year Republicans pay tribute to those who died for Ireland and remember the vision of a new Ireland that inspired them. A vision of a Republic based on equality and justice that is yet to be realised.

“Ireland has not realised its full potential. Partition hasn’t worked and has led to conflict, generations of emigration and an economy split in two. My generation has the opportunity to bring about Irish unity through peaceful means.

“Those who try to derail the peace process must not be allowed to do so. Those responsible for the horrific murder of Lyra McKee in Derry must be brought to justice.

“As a society and a nation we are looking to a peaceful future. A future that has no place for violence. A new and united Ireland will not come from renewed conflict, but by dialogue, agreement and democracy.”